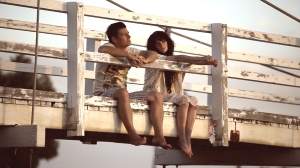 ‘ Holiday‘ is the latest single to be released by my favourite Bossa nova artist Adam Dunning, collaborating with the beautiful Folk singer Tash Parker.

It’s hard not to get caught up in feelings of nostalgia as you listen to the accordion playing in this song, recalling the excitement of ferry crossings from Dover to Calais and long hot summer holidays spent in the South of France.

It’s the waltz timing of Dunning’s guitar, the occasional sound of cymbals crashing like waves and the lulling vocals of Tash Parker that conjure up the rustic images in my mind.

Tash Parker, partner of Wally de Backer aka Gotye, makes a delighted return to our airwaves since the release of her spellbinding 2010 debut album ‘Waking Up‘, while the single follows on the back of Adam Dunning’s successful second album ‘Glass Bottom Boat‘ released earlier this year.

Produced by award winning producers Greg J Walker and Doug Brady – who’s worked with everyone from Kylie to Keith Urban, this summery, relaxing track born on the beaches of Australia’s Mornington Peninsula will have everyone smiling, swaying and reminiscing.

‘Holiday’ is out now on iTunes.