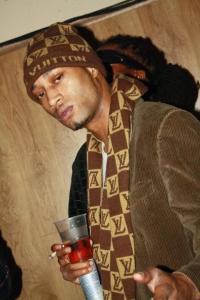 Reddman UK knew from an early age that his calling was in the music industry. It didn’t go unnoticed by his parents either as a young Reddman would use any bits of paper he could find to write his music on – which included his school books!

Inspired by the legendary Bob Marley, Bounty Killer and Gappy Ranks, Reddman says of his sound and style “What makes me different is i’m not all one tone, i’m always creating something new. All I can say is I give the people exactly what they want.”

With an impressive 13 year resume under his belt, which sees him appearing on Later with Jools Holland with his long time friend Sean Paul, working with the So Solid Crew and more recently Gappy Ranks, it won’t be long before Reddman UK is the hottest name on everyone’s lips.

After the competition, Musicvein caught up with Reddman UK to find out what he thought of the show and his competition.

MV: What was the whole One Mic experience like for you? “Well it was my first competition and I thought everyone was a winner that night, there were no losers! I think that the whole thing is what the UK is missing and I really enjoyed it. The judges comments were ‘bang on’ and real which I really appreciated. All the Repdat and OHtv staff made me feel at home on the night – even though it was damn cold!.” he laughs.

MV: And what did you think of Askala and Sunrize who you were competing against? “I think Askala is very good and Sunrize has got the makings of a very good female solo artist.”

MV: So what will you take from being in the competition? “Well I’ve learnt that I should rest! I was up all night in the studio and didn’t get any sleep but on a serious note, I did learn a lot from the event.”