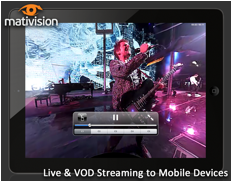 MATIvision, a premium 360-degree music video service has announced a development to their service which enables LIVE full HD streaming to mobile devices, making them the first service ever to stream HD content to a mobile device in true 360.

MATIvision (Multi Angle Totally Interactive Vision) was set up to deliver the ultimate “I was there experience” to viewers. The technology uses multiple special 360-degree cameras to film and broadcast live music performances and offers users a unique viewing experience. Using the ground-breaking MATIvision player, viewers can rotate cameras, zoom in and out, seamlessly switch from different cameras and choose multiple synchronized camera views to get that perfect experience.

Last year rock legend Slash chose MATIvision to stream the performance of his single ‘Standing in the Sun’ via a Facebook App – Slash 360. This was the world’s first fully Facebook integrated 360 Degree video, which was fully interactive. Speaking of the app Slash said; “I think the 360 application definitely takes the listener into the world of the musician so that you can actually be in the room where the artist is recording…it just gives it a lot more depth…”

So with MATIvision now streaming to mobile devices, you’d think that the experience wouldn’t be as good but in fact it’s just as brilliant. The fully interactive content is streamed at qualities up to 1920px FULL HD at 25fps on iPhones, iPads and iPods running iOS 6.0 or later. HD content can also be made available as VOD (Video On Demand) to the same mobile devices.

Anthony E. Karydis, CEO of MATIvision stated; “Mobile HD 360 streaming is a natural progression for MATIvision and something we will be rolling out extensively in 2013. Watch this space, in 360!”

The company are now in talks with various people in the music industry about the possibility of streaming their musical events live to mobile, to the fans of an event as well as to fans on the other side of the world.