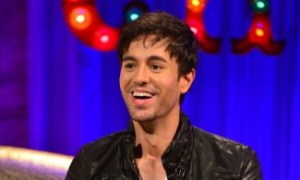 The 38-year-old singer spoke about all things including his music video for ‘I’m A Freak’, his choice of album name for ‘Sex And Love’ and promised that he’ll get naked in London’s Trafalga Square, if Spain won the 2014 World Cup.
Watch the full interview over on 4OD which also features Enrique Iglesias performing his hit single I’m A Freak.
‘I’m a Freak’ is lifted off Enrique’s ‘Sex And Love’ album, which is available to purchase now via iTunes, Amazon and Google Play.
Related Article
Sex And Love – Enrique Iglesias (album review)