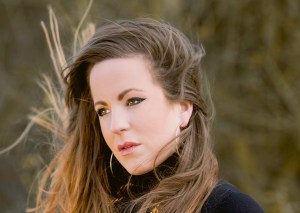 During 2013 on my hunt for new music, I came across the beautiful and talented Juliette Ashby. Her unique vocals and style of music had me hooked from the onset and since then I’ve eagerly followed her every move. But just who is Juliette Ashby? Musicvein met up with her at the Vortex Jazz Club, London for a chat about her life.

“This may sound like the biggest cliché of all but music is definitely in my blood.” says London born singer, songwriter and business woman Juliette Ashby.

Having grown up in a household where music was just as vital as breathing, Juliette was nurtured to the sounds of Stevie Wonder, Marvin Gaye, Bonnie Rait and a host of other musical legends. “Music played such a massive part in our day to day lives that I’ve never known or wanted anything other than to be a musician. I come from an artistic family where my Mum, sister and aunts all have beautiful voices even my Dad too!”

“My parents always encouraged me to live the life I wanted and were very supportive of my musical pursuits. When I was 7 or 8 years old I learned to play the piano. My parents were open to me trying out new things and finding my creative vein, so I also dabbled with the bass, electric violin, cello and even the saxophone which I really loved until I realized very early on that I couldn’t sing and play the Sax at the same time, so that went out the window – quite literally! But it was always my first love – the piano – that I went back to. We had a beautiful piano in our house and it would always relax me to sit and tinkle away at the keys.”

When Juliette says that music is in her blood, it’s a statement that certainly rings true. As a child, her father Jonathan Ashby founded the global music, entertainment news and photo agency WENN – then known as the World Rock News Network. “My dad was a music journalist and worked for ABC Radio in America before setting up WENN in the conservatory of our house. It was an international project which would run throughout the night. There was always music being played and people milling about the house, the laughter, chatter and music would be so soothing to me. My dad was always interviewing famous musicians and artists and having all this around me it seemed inevitable that I’d want to be a musician. I really admire my dad, he’s such a free spirit who taught me that with hard work and determination you can achieve anything. I never started off with the notion that I wanted to become famous it was just my passion to make music. I remember one of the first songs I wrote, ‘Place in My Heart’, when I was 7 and on holiday with my family. It was a Country and Western song and I would sing it over and over again – driving everyone around me insane! I listened to a lot of music by the blues artist Bonny Rait back then. She was the first artist that I felt a real connection to and her music really moved and influenced me. I loved everything about Bonny Rait, the way she looked, dressed, sang – I knew all the words to her songs back to back – she was my first idol. I also loved the music of Bob Marley too, both Reggae and Country/Blues music is moody it really reflects me and my character.”

Juliette could certainly have shot into the limelight had she chosen to take advantage of all the rich pickings she had around her, firstly her father’s company WENN, her now stepfather Alan Glass –  is a producer who’s worked with almost every artist in the business and her best friend was the late Amy Winehouse.

“I am fortunate to have grown up with so many influential people around me and it has opened up a lot of doors to me but I’ve always been determined that my talent speaks for itself. When I was at primary school I met my best friend Amy (Winehouse). From the age of 4 we were inseparable and were always getting up to mischief. We were very boisterous and used to get into quite a lot of trouble for messing around when we should have been paying attention in class. What drew us together was our love of performing, making up songs, dances you name it we did it together. It was during our last years at Primary school that we first went into the studio. My now stepfather, Alan Glass, thought I was talented and suggested to my mum that I should give singing a go. Well I wasn’t doing anything without my best friend Amy and we had formed a little rap duo called Sweet & Sour (me being the sweet half of course). We went into the studio and laid down a few tracks. Life was such fun back then, we thought we were the English kid version of the USA rap duo Salt n Pepa – we even recorded a track called Spinderella (in reference to Spinderella being the DJ of the rap group). Alan was my mentor and really opened my eyes on how to record in the studio. From a young age I learned all about my vocals and how to structure and write a song.”

But things wasn’t all plain sailing from there on and Juliette’s life almost roller-coastered out of control. “I left school when I was younger than most and began to hang-out with a group of people much older. I certainly wasn’t doing things that normal teenagers would do at 14/15 years of age. I was out drinking and hiding things from my parents. Eventually though I reined my behaviour in. I actually got to the point, when I was 17, where I had had enough of wild nights out and wanted to achieve something with my life, so I took a job in childcare and went back to making music. I believe that everything happens for a reason and I am really confident with who I am now as a person. Through my experiences, the things I’ve seen/done and losing my best friend Amy, it’s all shaped me into the person that I am today and provides me with so much inspiration for my songs.”

So with life turned around to a more positive direction, Juliette has grabbed life by the horns and is boldly riding out the rest of her journey. Five years ago she set up JJ’s Soul Shack with her sister Jessica. Wanting a place where musicians and singers could show off their talent to producers, A&R scouts, writers etc, the shack started off in a small bar in Enfield. It’s now become so successful that they’ve secured a quarterly residency at the infamous Jazz Cafe Camden – great news for her ever growing fan-base, eager to hear more from North London’s jewel in the crown.

Now strongly backed by Radio and TV shows such as BBC 1Xtra and MTV, Juliette’s music is increasingly being sort after. Starting with a licensing deal with VH1 to feature her music on prime-time TV shows Mob Wives, Single Ladies and Basketball Wives – is there any stopping this lady!

Hot from her recent trip to America which found her writing new material for her eagerly awaited debut Album ‘BitterSweet‘ due for release later this year (see Pledge Music link for more info) Juliette has been hard at work with some first-class producers including Mike Kalombo (So So Def) & Da Brat, Graham Marsh (Cee-Lo Green, Bruno Mars), Hardwork & Mavelle (Damian Marley & Sean Paul), Blac Elvis (Beyonce, Usher) and Novel (Alicia Keys, India Arie) 2014 is going to be a massive year for Juliette Ashby.