The new Band Aid is available from today for download for the humble price of 99p. 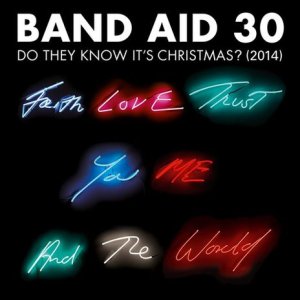 30 years after the original song was originally released, Sir Bob Geldof has organised another star studded line-up to sing this years relief song in aid of the African Ebola crisis which has, since its outbreak, killed over 5000 people.

In the coming weeks a CD version will be made available at the cost of £4 but not available on streaming sites or for free until January 2015.

It’s Christmas time, and there’s no need to be afraid – 1D

At Christmas time, we let in light and banish shade – Ed Sheeran

And in our world of plenty, we can spread a smile of joy – Rita Ora

Throw your arms around the world At Christmas time – Sam Smith

But say a prayer, pray for the other ones – Paloma Faith

At Christmas time, it’s hard but while you’re having fun – Emeli Sande

There’s a world outside your window, and it’s a world of dread and fear – Elbow

Where a kiss of love can kill you – Dan from Bastille

and there’s death in every tear – Angelique Kidjo

Well tonight we’re reaching out and touching you – Bono

No peace and joy this Christmas in West Africa – Seal

The only hope they’ll have is being alive – Ellie Goulding

Where to comfort is to fear, Where to touch is to be scared – Sinead O’Connor

How can they know it’s Christmas time at all – Bono

Raise a glass to everyone – Olly Murs

And here’s to them – Bastille

And all their years to come – Sam Smith

Let them know it’s Christmas time after all – Rita Ora