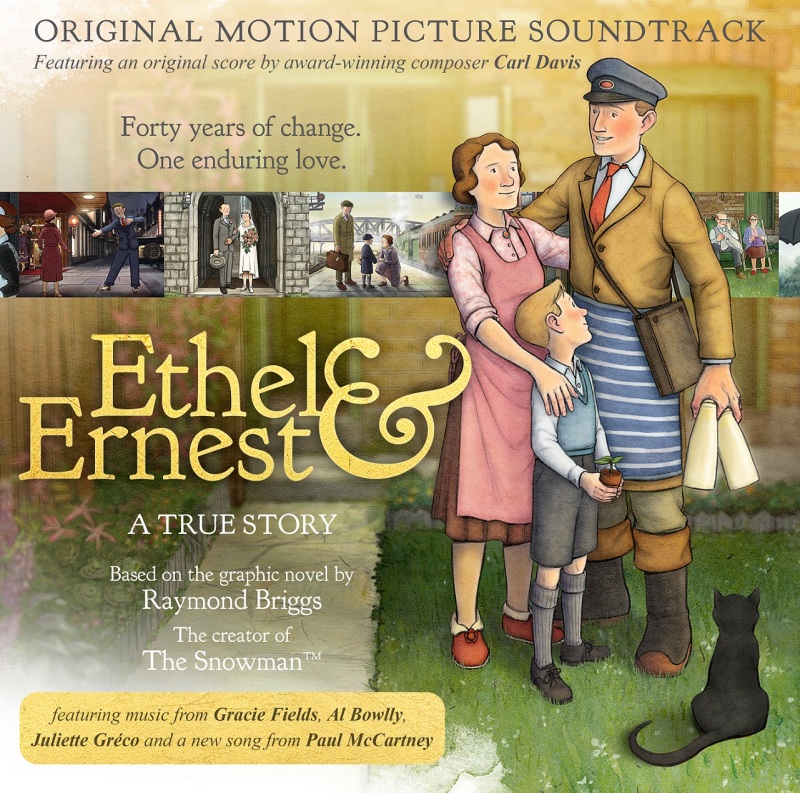 Available to buy and download now, the CD features the original score, composed by internationally renowned composer and conductor Carl Davis, alongside tracks from the 1920s to the 1970s including music from Gracie Fields, Charles Penrose, Juliette Greco, The Shadows and Dave Berry and an original song written and performed by Paul McCartney.

Based on the 1998 book by acclaimed British author and illustrator Raymond Briggs, the beautifully hand-drawn film spans 40 years and tells the true story of Raymond’s parents, Ethel and Ernest – two ordinary Londoners living through a period of extraordinary events and immense social change; from their first chance meeting in 1928, through the birth of their son Raymond in 1934, to their deaths, within months of each other, in 1971. A team of top British acting talent make up the voice cast including Jim Broadbent, Brenda Blethyn, Luke Treadaway, Virginia McKenna, Pam Ferris, June Brown, Roger Allam and Simon Day.

Ethel & Ernest is Carl Davis’s first score for an animated feature and is performed by the Chamber Orchestra of London with a piano solo by Huw Watkins. Original recordings of songs and tunes from the 1920s through to the 1970s accompany the score, including ‘Apple Blossom Time’ by Victor Silvester, ‘The Deepest Shelter in Town’ by Florence Desmond, ‘We’ll Meet Again’ by Jack Hylton, ‘Singing in the Bathtub’ by Gracie Fields, ‘Sous Le Ciel de Paris’ by Juliette Greco, ‘Foot Tapper’ by The Shadows and ‘Little Things’ by Dave Berry.

In addition, two tracks in the film come from a very famous musical family. Back in the 1920s Paul McCartney’s father, James McCartney, wrote a tune called ‘Walking in the Park with Eloise’ when he was leader of the Jim Mac’s Jazz Band, a version of which was recorded by Paul McCartney as The Country Hams in 1974. This has been re-arranged specially for the film by Carl Davis and performed by the Chamber Orchestra of London. In addition Paul McCartney himself has written and performed a brand new song for the film, called ‘In The Blink Of An Eye’.

Speaking of the project Carl Davis says, “I am proud to be a member of the team that translated Raymond Briggs’ profound book into an elegant and matchless film. It is a superb achievement.

Director Roger Mainwood continues “Ethel & Ernest spans 40 years of the 20th century, from 1928 to 1971. So when it came to weaving contemporary songs and tunes into the story we were able to choose some of the finest popular music ever recorded. You will hear the big band sounds of the 1930s, popular romantic ballads from the war years, comic songs in the music hall tradition, right through to the pop culture of the 1960s. There are familiar classics in the mix but we also wanted audiences to be surprised by some less well known tracks.”

Ethel & Ernest is out in cinemas now. The BBC will broadcast the film on TV in the UK later this year.

9.       Ambrose & His Orchestra/Denny Dennis – Blue Skies Are Around The Corner

15.   Ivor Kirchin & His Band – Underneath The Spreading Chestnut Tree

19.   Gracie Fields – Singing In The Bathtub