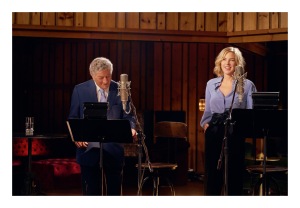 The album celebrates their love shared love for the music of George and Ira Gershwin and is set for release September 14th through Verve Records, just in time for the 120th Anniversary of George Gershwin’s birthday (Sept 26th).

Danny Bennett, President and CEO of Verve Label Group commented,“When Tony Bennett and Diana Krall sing the music of the Gershwins’, it’s truly the consummate artistic pairing of singers and songwriting.  It’s one of those recordings that when you listen to it, you recognize instantly that it had to happen – it was just a matter of getting these two extraordinary performers into a studio and putting the Gershwin songbook in front of them.”

‘Love Is Here To Stay’ was recorded with the Grammy award winning Bill Charlap Trio and the stunning result is a subtle, sophisticated and beautifully rendered love letter to The Gershwins’ music and their status as one of the premiere songwriters of the American popular standard.