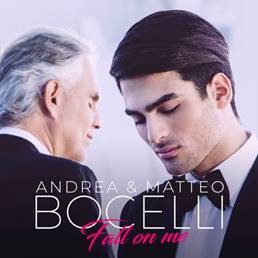 Andrea Bocelli has teamed up with some of the hottest musical stars on the planet for his forthcoming album ‘Si’ – reuniting with Ed Sheeran, collaborating with Dua Lipa, Josh Groban, Aida Garifullina and Tiziano Ferro – release date 26th October.

After the chart-topping ‘Perfect Symphony’ with Ed Sheeran, the duo will collaborate again on new Sheeran/Ferro penning ‘Amo Soltanto Te’.

Bocelli seeks out the vocals of Dua Lipa for the single ‘If Only’, Josh Groban on ‘We Will Meet Once Again’ and soprano Aida Garifullina on ‘Ave Maria Pietas’ . His son Amos performs piano on the acoustic version of the tracks ‘Sono Qui’ and ‘Ali di Libertà’, but it’s the father/son duo with 20 year old Matteo that is setting tongues wagging.

‘Fall On Me’ reflects the bond between parent and child and features in the new Disney film, The Nutcracker and The Four Realms, startting Keira Knightley, Helen Mirren and Morgan Freeman, release date 2nd November.

Talking of how his voice compares to Matteo‘s, Andrea says: “Technically they are very different, but there is one thing that makes them most similar: the attitude. That characteristic way of expressing yourself through your voice. This makes Matteo and I very similar. But that is something that you cannot learn, that cannot be taught. That is something you are born with.”

Andrea Bocelli, who turns 60 this Saturday (22nd September), has brought together family and friends for his new album. It was recorded at his home in Italy and produced by the legendary Bob Ezrin (Pink Floyd, Lou Reed, Alice Cooper, Deep Purple, Thirty Seconds To Mars) and includes a song produced by Mauro Malavasi and another one by Andrea’s oldest friend, Pierpaolo Guerrini. There is also a song called ‘Vivo’, which is an emotional homage to his wife Veronica.

‘If Only’ (his duet with Dua Lipa) was co-written by Francesco Sartori and the late Lucio Quarantotto – who helped pen one of Bocelli’s biggest hits, ‘Con Te Partirò’ (Time To Say Goodbye), which was released over 20 years ago and has become of the classical best-selling singles of all time.

Andrea Bocelli says of the album: “I wanted to go back to my memories of being a young man, playing at a piano bar. Obviously since then, I’ve produced lots of albums, sung lots of covers, performed many other things. But at a certain point I said to myself: ‘Maybe the time has come to put my effort into finding new songs.’ Like starting all over again, as it were, in my career.”