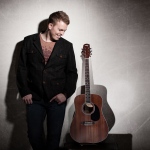 “Like a supersonic boom!” George Simpson aims to blast into the UK Charts with debut album “Playing for Strangers.”

Full of great up-tempo guitar based songs, broken up by a power ballad or two – this Indie-pop album is guaranteed to be played over and over again.

Singer, Songwriter and Musician George, who spent the last decade as lead singer for a variety of bands in his home town of Melton Mowbray, Leicestershire, decided it was high time to make his debut and went about setting up his own record label. The newly released album “Playing for Strangers” was eventually mastered at the famous Abbey Road Studios in London, by top Engineer Geoff Pesche – who’s worked on the albums of the Gorillaz, Coldplay, Dizzie Rascal, Basement Jaxx and more!

With songs rich in life experience content, “Playing for Strangers” is for people who want more than just catchy hooks, cheesy lyrics and music to dance to – although you will find a few air-drumming moments in tracks ‘Visions of our Lives’, ‘Open Door’ and my personal fave ‘You Make Me Feel Good’.

The albums songs are short and straight to the point, capturing the musical essence of artists who have trodden the path before him but without being a blatant copycat. The first single from the album, ‘Never Leave You Out In The Rain’ for instance has that very essence of a Coldplay track but with George’s own unique vocals and style.

There isn’t one song on the album that I’d hit the ‘skip’ button on. Full of gems like ‘Turn away’, the beautiful acoustic track ‘You’re Not There’, power ballad ‘There’s Still Time’ – which shows off the depth of George’s writing ability, while another personal fave of mine ‘Crazy’ is downright fist-pumping fun and guaranteed to get you up dancing.

Radio airplay should be no problem at all for this album. Dj’s take note of the name, as George Simpson is a big fish in a small pond, which – if he continues to churn out music like this – will be conquering the UK and USA markets in no time at all.

For more information on George visit his website then head on over to iTunes to download his album ‘Playing For Strangers‘.