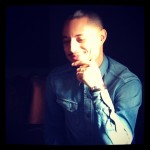 Its been a while since I’ve listened to an album with such deeply-emotive music and messages that all I’ve wanted to do was lay back, close my eyes and feel my spirit transcend to the sound. That’s exactly what ‘No Beginning No End’ by José James will do.

It’s the mildly hypnotic dulcet of José, the repetitiveness of words and choruses, the blend of Jazz, Rhythm and Blues that leaves each song’s imprint on your senses.

Ladies if you thought that only D’Angelo could sing to your soul, then think again as you take a listen to José’s ‘Do You Feel’. A song so honest and soul baring for a man that by the time the music gets to the ethereal gospel-tinged solo, you’d have already imagined the next 10 years of your life in marital bliss. In fact the romantic lyricist doesn’t stop there and continues the appassionato in songs; ‘It’s All Over Your Body’, ‘Heaven On The Ground’, ‘Bird Of Space’, ‘Tomorrow’ and the album’s title track ‘No Beginning No End’.

José brought the best of the best to collaborate with him on this album. Notably the Grammy Award winning Robert Glasper and drummer extraordinaire Chris Dave on ‘Vanguard’. Look out for the mesmerizing voice of Hindi Zahra (a French-Moroccan singer) on ‘Sword & Gun’ a song with a powerful message embedded into a hip-hop street sound. While the gentle ballads ‘Come To My Door’ and ‘Heaven On The Ground’ were written by Grammy Nominated singer/songwriter and guitarist Emily King – all instrumental in making this album a sheer masterpiece.

José James starts the UK & Ireland leg of his tour this month, see his website for more details and to buy ‘No Beginning No End’ head straight on over to iTunes – you won’t be disappointed.