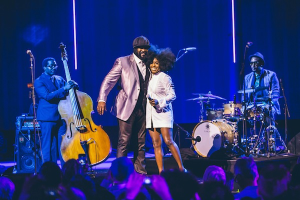 The song, which now features on a deluxe version of his Gold status album ‘Liquid Spirit’, deals with the emotions felt around a relationship break-up. Talking of working with Laura again Gregory say, “Working with Laura is such a pleasure, she was a very special guest at my iTunes festival gig at the Roundhouse last year and the crowd loved her.”

Gregory is certainly a hot topic at the moment with ‘Liquid Spirit’ being named ‘Best Jazz Vocal Album’ at the Grammys. He was recently nominated for the ‘International Artist of the Year’ award at the BBC Music Awards, alongside the likes of Prince, Dolly Parton and Pharrell Williams. But it’s his truly breath-taking performances that are impressing the critics of the BluesFest at the Royal Albert Hall, iTunes Festival at the Roundhouse and Jazz FM’s Love Supreme Festival (2014).